Big Freeze at the ‘G raises $2.4 million for MND research

On this Queen's Birthday holiday at the MCG, 11 AFL celebrities plummeted down a water slide into 3 tonnes of icy water to raise awareness and funds for research into a cure for Motor Neurone Disease.

The integrated campaign spanned free-to-air television, Foxtel, press, radio, outdoor, social media, in-program content and PR. As the marketing communications agency, T20 developed the ‘Big Freeze at the G' concept and branding, the over-arching campaign strategy, social media strategy and the creative assets, including the ‘toolkit' for the media and event ambassadors.

During the campaign, long-standing TV network rivalries were put aside and participating celebrities such as Tim Watson, Gary Lyon and Sam Lane, used their media profiles to encourage donations to see them ‘frozen' at the MCG. Once they raised their $10,000 goal, they then nominated the next celebrity. And in a testament to the power of television, when the ‘Big Freeze at the G' was featured on Channel 9's Footy Show, over $1,000,000 was raised. 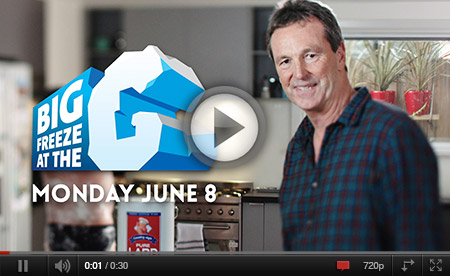 The results for the Big Freeze at the ‘G were spectacular. Over 10,000 people, including Prime Minister Tony Abbott, joined Neale Daniher on the AHG walk to the ‘G. Once inside, they joined 65,000 fans to watch the event. A national TV audience of 785,000 tuned in, delivering a 10% rating increase on the previous year. And the consolidated social media strategy saw the campaign hashtag #freezeMND become the top trending social media topic. And more importantly, over $2.4 million and untold awareness was raised for MND research.

We’re proud to been part of the team that made the Big Freeze at the ‘G the success that it was. It shows what can be achieved with a strong concept, focussed strategy, and above all teamwork.

The new Guests website now reflects the brand in a very positive way.

A saucepan needs a tissue, and a toothbrush needs a hug.

We can confidently say that both of these spots will stand out in an often-noisy, often-predictable ad-break.

We're looking for some talented people to join our growing team

Where can we take your business?